Most of us know that the idea of building a road belonged to the dictator, Ceausescu. The reality is that there were sketches and plans made ​​before 1960 containing details of a road through Fagaras mountains. The project was abandoned because, at the time, the budget was not enough to cover such expenses .

After Czechoslovakian invasion, in 1968, the question of a strategic road arose, but one that should be in the area of the Mehedinti and Cerna mountains.

During this time, Nicolae Ceausescu found the original plans and decided to build a single lane road which will ensure the transport of Fagaras forest timber and a route between the south and center of the country .

The works started in December 1969 from both ends in the south by the trenchers of the 1st Regiment Ramnicu Valcea, and in the north by the 52nd Regiment Alba Iulia. They joined civilian workers mainly attracted quite consistent salary at the time, about 6,000 lei.

In 1971, Ceausescu changed plans and the road became a national road with two lanes and the Fagaras Mountains area should have become a winter sports resort with over 100 km of ski slopes, bob slopes, skating rinks and hotels.

The project has stopped due to an acute lack of funds or their rederectioning towards other works considered at the time as strict necessities. The road sinewing along The Fagaras mountain peaks had already cost too much.

The southern part of the road had been built on former forest roads which already existed around the lake, and down the Jiu Valley a forest road of approximately 10 km was already made.

The work had to be completed in 1973, but severe weather See More conditions and the difficulty of the line caused the deadline of the work to be postponed for one year.

The road was completed on September 20th, 1974, with Ceausescu being present at the opening. Initially, the alpine route should have borne his name, but he refused and so its name became Transfagarasan .

The asphalting of the road took another four years, the route as we know it today being completed in 1980 .

The making of the road demanded human sacrifices from both the militaries and the civilians. Official data speak of 40 people who gave their lives to build Transfagarasan . 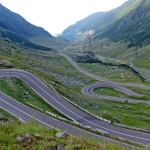 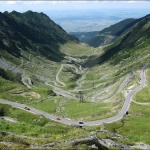 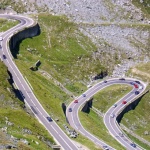