The settlement was founded by German settlers (actually Franconi North Rhine region), who had been invited to settle in Transylvania by the Hungarian King Géza II to defend the eastern borders. In this historical period ethnic German people were named Saxon, but true German settlers known as “Transylvanian Saxons” have no connection with the Saxons in north-eastern and south-eastern Germany. These settlers get fundus regius (royal land) into use and enjoy special rights and privileges.

Over the years Sighisoara was not been exempted from hardships, the first being the grand tartar invasion in 1241, when the city was still not fortified. The construction of the fortress wall, which has a length of 950 m, began in 1350. The initial height was 4 m, but in the15th century it was raised to 7-8 m. It had 14 towers (each belonging to a guild) and 4 bastions. Currently there are 9 towers and three bastions, of which the most representative is the Clock Tower (Tower of the Hours).

Between 1431 and 1435 Vlad Dracul stayed at Sighisoara, waiting for the right moment to climb the throne of Wallachia. He also ruled over these regions in the name of Sigismund of Luxemburg, King of Hungary. It seems that during this period (in 1431) Vlad Tepes was born in Sighisoara.

The fortress in the middle of the town is the most important sight and one of the few medieval fortresses in Europe still inhabited.

The Clock Tower – with a 64 m height, is the symbol of Sighisoara dating back the 14th century; in those days it had a protective role on the main gate of the city. The Clock with dolls represent the weekdays and the rooster on top foretells the weather See More for the people in Sighisoara. Since 1899, the Clock Tower in Sighisoara has hosted the History Museum.

The Monastery Church – dates back to 1298 and was the Dominican monastery, today housing the Evangelical Lutheran Church . A beautiful tradition preserved today is that after mass the priest shakes hands with all parishioners before they leave the church.

The Venetian House – with its windows built in Gothic Venetian style, it is supposed to date back to the 17th century.

Vlad Dracul’s House – here lived the father of Vlad the Impaler and coined his Silver Ducat. It is said that in this house Vlad Tepes (the Impaler) was born.

The Shoemakers Tower – dating back to the 14th centuries, it is built on a hexagonal draught.

The Tailors Tower dating back to the 14th centuries, it is a tower-gate that was destroyed by fire in 1676 and was later rebuilt.

The Furriers Tower – dating back to the 14th centuries. It is the cantral office of ‚Mihai Eminescu Trust’ Foundation. Here you can find the only master craftsman in a tower promoting cultural tourism.

The Covered Stairs – having 176 steps that were built after 1642, each flight of 6 stairs (for 6 days of the week, the 7th for resting). Following the stairs we can get to the Church on top of the Hill and ‚Joseph Haltrich’ High School.

The Church on the Hill – stands majestically on a hill and dominates the whole area of ​​the city. It is an evangelical church, the 4th largest in Transylvania and an important architectural monument. Here is only crypt in Transylvania with 60 graves open to visit.

The City Square – is a pretty square in the historic center of Sighisoara where we can dine in restaurants that are waiting to welcome us. 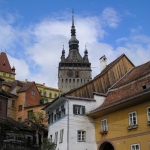 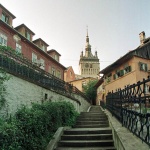 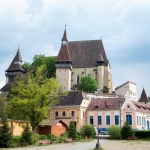 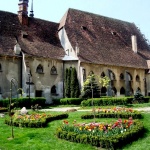 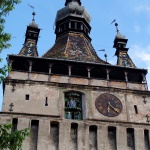