Sibiu was and still is one of the most important and flourishing cities in Transylvania, one of the main centers of Saxon colonists settled in the area. The city was the capital of Transylvania between 1692-1791 and 1849-1865. It has known a significant economic and cultural revival in recent years. Sibiu is currently one of the cities with the highest level of foreign investment in Romania. In 2007 was the European Capital of Culture together with Luxemburg. Sibiu became a center of trade and was the largest German city in Transylvania for centuries. As a result of the Second World War and the Communist era, the Saxon population has decreased considerably by deportations to Siberia and later by massive emigration to Germany.

The city is full of attractions and places to be visited, mostly concentrated in the historic center with a medieval air that you will feel the moment we get there. Here are some attractions we will see:

Union Square –It’s in the Upper Town at 400 m altitude; from here you can easily reach the resort Păltiniş.

“Radu Stanca” National Theatre – the first theatre opened to the public in Transylvania.

The City ​​Walls – served as a defense wall of the city; when the Evangelical Church bells were heard, people knew the city was under attack.

Bust of Francis I – Emperor of Austria – because of his visit Sibiu was electrified ( the third electrified city in the Austro-Hungarian Empire after Vienna and Timisoara) .

The three towers – were built of stone and brick and were part of the third fortified enclosure of the City: the Potters’ Tower, the Gunsmiths’ Tower, the Carpenters’ Tower.

Great Square – the largest square in the old town center where many events are organized including the Easter and Christmas Fairs .

Roman Catholic Church – where the mass is held in three languages. On Sunday at 10:00 a.m. in the Old Town one can hear the bells of five churches: Roman-Catholic, Evangelical, Orthodox and two Protestant churches .

The fountain in the Great Square – a place where executions took place .

The Council Tower – borders the Small Square and Large Square and it is called so because it is stuck to the building of the former municipalities; it collapsed after a strong earthquake and was rebuilt with the help of citizens.

Small Square – a beautiful square where you will find a variety of restaurants, terraces, cafes, etc; it connects the Upper Town and Lower Town .

Liars Bridge – it connects the Small Square and Huett Square; it was originally a wooden bridge, and its German name was altered from the Streched Bridge into the Liars Bridge; It is the first bridge made of wrought iron in Romania, with no propping. 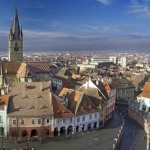 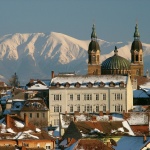 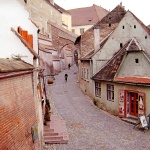 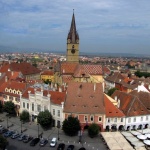 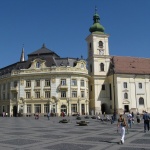