Built on an islet in the northern part of Lake Snagov, Snagov Monastery was an important center of culture in medieval Wallachia. The first written document attesting Snagov dates to 1408 in a charter of Mircea cel Batran, but it is believed that a place of worship existed here since the reign of Vladislav I ( 1364-1379 ).

Snagov monastery ensemble, made of brick, was surrounded by strong defense walls guarded by a tall observation and watch tower which also served as bellfry.

Rebuilt in 1517-1521 by Neagoe Basarab, when the monastery church was given the shape similar to that of the present day, Snagov Monastery continues to be an important building and a significant place of economic and social convergence of the time.

From the entire architectural ensemble there once stood only one of the churches and the bellfry are preserved.

According to some researchers, Vlad Tepes himself, killed in 1476 in the forest around Balteni, was buried at Snagov. 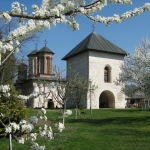 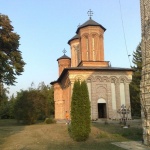