On the site of the present church there was first a Roman basilica, traces of which are found just below the floor. The basilica was probably built in the 13th century with the founding of the village.

The church today was built in the 15th century in Gothic style. Thereafter, to meet the continual invasions, the church was surrounded by walls and towers. Today there are still four towers and high walls of 6-7 m, provided with ramparts.

In the church there are numerous objects extremely valuable like the 1528 pews, the altar from 1779, the organ from 1807 and the canopy dated 1746. Another important element of the church is the railing gate, located above the north portal, which has been preserved intact since 1525. At the entry in the churchyard there is a small museum of Saxon culture where you can admire traditional saxon costumes, photographs and other objects donated by the members of Vinyard Valley community.

The church is on the UNESCO world heritage list. 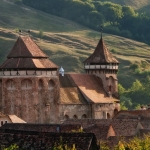 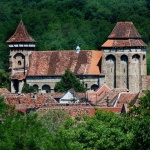