Szentkereszty Castle is a historical monument in Arcus commune. Once here was the Benkos Mansion which was bought in 1840 by Count Kalnoky György and his wife, the Baronesse Haller Anna. After Kalnoky György’s death, Haller Anna married Baron Szentkereszty Zsigmond, and the masion was rebuilt by the two spouses in 1870.

Back then there used to be, apart from the vegetable garden, an orchard, a knights’ school as well as a bowling alley. The inventory in 1871 mentions the existence of a „schweiczer” house and that of a gazebo of about 12 meters. The Neo-baroque look of the castle today is due to the restoration in 1890 made by Baron and Representative Szentkereszty Béla and his wife, Maria Floresco.

The design of the building was made by an engineer in Budapest, the furniture and interior design were ordered from manufacturers in Paris or Vienna. The castle was built in Neo-baroque style, on two floors and the underground cellar. The façade is made prominent through the terrace buttressed by the six classical-style columns and the rich Neo-baroque decorations are to be observed on the northern and southern sides of the castle. 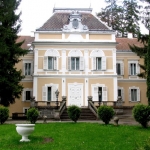 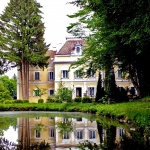