Located in the city of Hunedoara, in the south-western corner of Transylvania, Corvin Castle, also called Hunyadi Castle, maintained standing even today, after seven centuries, with its towers firmly planted in history. It is one of the most popular castles in Europe, and its lanes are crossed on foot, annually, by more than 70,000 tourists.

The footprint of the centuries is visible in the architectonic styles which transformed it into a living history lesson of architecture. A “puzzle” in which the Gothic, neo-Gothic, Renaissance or Baroque elements merge, making it a unique presence.

The fortification is dated in the XIVth-XVth centuries and one of the most famous owners was none other than John Hunyadi, the great defender of Christianity in front of the Ottoman invasion. The Hunyadi Castle covers a total area of ​​7,000 square meters, including 42 rooms, two terraces and two bridges.

The Fountain Legend or the Legend of the Crow are some of the echoes that are still walking along the corridors of the castle, with medieval music sung at the vibraphone of Giovanni, the artist. The chapel, eclectic style pieces of furniture, the Princess room, the Diet Hall and the museum housed in the Caver Hall, are only a few of the many attractions of the castle. The New Gate Tower, White Tower or Drummers’ Tower, linked together by bodies “of protocol” such as the Administrative Palace or the Matthias wing, form the story of a building constantly adapted to trends along the 7 centuries.

The Corvin or Hunyadi Castle is definitely one of the most important jewellery that history has left as dowry in our country. 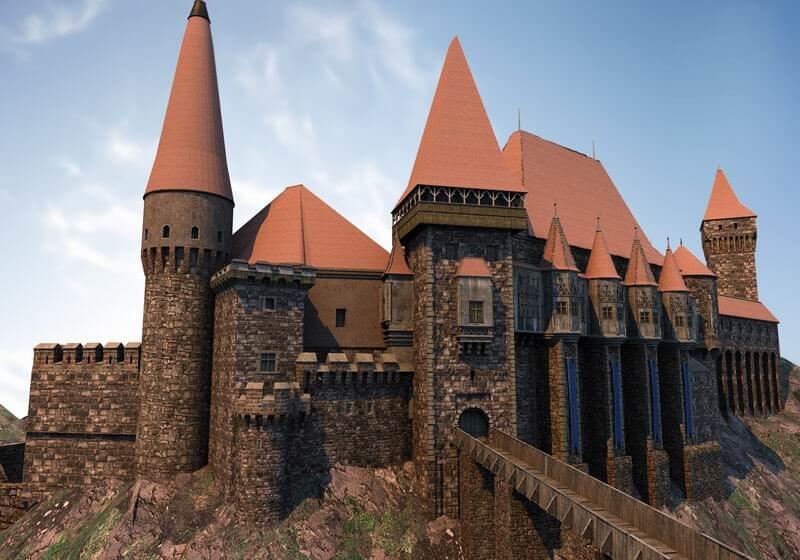