The Biertan citadel is found in the town with the same name, in Sibiu See More and it entered the UNESCO heritage in 1993.The citadel is actually a Fortified Evangelical Church with defensive design located on the church and its premises.

This is one of the biggest and the most famous fortified churches in Transylvania.The church was built between 1493 and 1522 on the place of another church. In the interior precinct, one can notice the southern tower, which has the former Catholic chapel on the gorund floor, with murals from the 16th century, the western tower which was the old city hall and the north-eastern tower which today is used as lapidarium and which houses remarkable 16th and 17th century tombstones.

The altar is one of the biggest altars in Transylvania and it was built by master craftsmen from Nurenberg and Viena. Pews were made of linden wood, the pulpit is built by Ulrich from Brasov See More and is an extremely valuable piece being carved from a single block of stone .

The organ is impressive in size and was built by Karl Hesse. The door is unique in Europe built by the same Johannes Reichmut to protect the treasure room and on the inside of the door a locking system blocks it all around in 19 points. 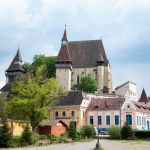 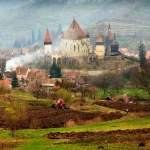 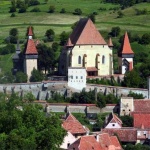