Between 1541 and 1711 the city was, with some interruptions, the residence and the political capital of Transylvania. For a short period of time, starting with the recognition of Prince Sigismund Báthory as sovereign of Moldova and Wallachia (1595), it was the capital of these countries, the political project being continued by Mihai Vitezul (Michael the Brave).

Alba Iulia was, thus, the first capital of the three provinces. The Grand National Assembly took place in Alba Iulia on December 1st 1918, which led to the unification of Transylvania and Banat to the Romanian realm. In 1922, in Alba Iulia took place the official coronation ceremony of the kings of Greater Romania, Ferdinand 1st and Maria, moment that granted the historical importance and the role of the historical capital city.

The main historical area of ​​Alba Iulia is the White Fortress Carolina, which was developed a lot by Charles the VIth. The Habsburgs renamed the city Karlsburg in his honor. The Vauban-style fortress with 7 towers in the shape of a star, was built in the period between 1716 to 1735, after a plan of the Italian architect Giovanni Morando Visconti, the most impressive of its kind in south-eastern Europe, especially due to the triumphal gates that ensured access, which were six initially.

The main touristic attractions located within the fortress are: the Reunification Cathedral, Union Museum and Hall, the Statuary of the Union Coryphaei, Batthyaneum Library (see John Marculeț (eds.), Romania Superlatives. Little encyclopaedia, publishing house Meronia, Bucharest, 2010), Roman Catholic Cathedral, Horea, Cloșca and Crișan cell, located in the architectural ensemble of the 3rd gate of the fortress, Apor Palace, Princes Palace, 1 Decembrie University, the Obelisk built in the memory of Horea, Cloșca and Crișan, the Three Fortifications Route – including the Roman castrum gate, the Equestrian statue of Voivode Michael the Brave, monument dedicated to the memory of Avram Iancu, Custozza Monument, the wooden church of the first Transylvania Orthodox Cathedral, founded by Voivode Michael the Brave, the Busts of King Ferdinand and Queen Mary etc.

Inside the Reunification Cathedral there are two important works of art that have escaped from the terror and persecution of communism, representing the Romanian monarchy in that period, King Ferdinand and Queen Mary, crowned heads in 1922 in this cathedral. Inside the Roman Catholic Cathedral the governor John Hunyadi is buried. On the left side of the Roman Catholic Cathedral, above a stained glass you can see an interesting positioning of three horse heads with three ears, each head with two ears, sculpture performed and positioned in an interesting way. In the cathedral crypt, the Bishop Áron Mártonare was buried.

The Roman Catholic Cathedral St. Michael is an outstanding work of late Romanesque style religious architecture, the most valuable monument of architecture in Transylvania, dating from the same period as the famous Notre-Dame Cathedral of Paris, 1247-1291. It was built in the period 1247-1291, developing a basilica from the IXth century, partially destroyed by the Tartars in 1241, and apparently at the initial plans also contributed the French architect Villard de Honnecourt. 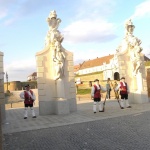 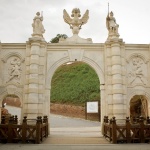